The Man Without a Body, Nostradamus Does Wall Street

Forget financial apps, Merrill Lynch, or Fidelity. To make a killing in investing, one needs a prophet who is never wrong. The problem is Nostradamus lived in the 16th century. Imagine if you could have this great prophet at your service to make those tough investment decisions. Perhaps you could tap into his brilliance and wager on Super Bowls and World Series.' Hence 1957's "The Man Without a Body." Warning...after seeing this film you may not want to know the future. 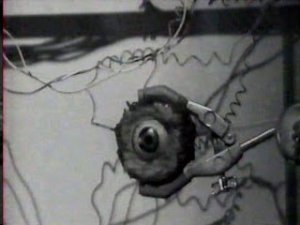 Karl Brussard (George Coulouris) is the richest, most powerful man in the world. He has built a financial empire. Bad news...he's dying of a brain tumor. Desiring to send his empire into the future, he barges in on Dr. Merritt (Robert Hutton), the greatest brain surgeon in the world. Karl knows Merritt has perfected brain transplants. Merritt's laboratory is adorned with his macabre experiments. A monkey's head swivels and watches the goings on. An eyeball, suspended with wires watches one's every move. Brussard wants Merritt to remove his damaged brain and replace it with the greatest mind in the history of mankind. You might ask who's brain would that be? 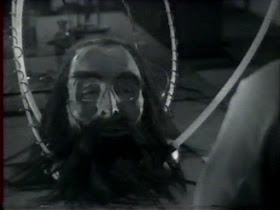 Karl then pays for a grave-robber to travel to France and steal the head of Nostradamus. The theft goes forth perfectly, but as you can imagine, difficulties arise. Brussard's trophy girlfriend Odette (Nadja Regin) falls for Merritt's assistant Lou (Sheldon Lawrence). The two plot to make sure Karl doesn't  survive the transplant operation. Even more awkwardness arises when Merritt is successful in reanimating Nostradamus' head. The old prophet isn't keen on the idea of being mounted on Karl's torso. As Karl pumps the prophet's head for financial advice, Nostradamus devises a horrific plot. No spoilers here but you won't believe the last 15 minutes of this film. 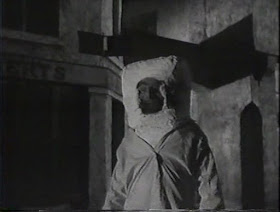 Will Merritt ever put Nostradamus' head on Karl's body? Will Nostradamus manage to master the financial markets? Will the 500 year old head develop an attraction to the sultry Odette? This is a wild one. The plot is far fetched and has a couple of big holes, but the ambition of "The Man Without a Body" is very inspiring. Directed by W. Lee Wilder, this film will gratify any B movie fan.
Christopher Zisi at 12:00 AM
Share