Frogs, Kermit and Friends vs. the Filthy Rich

Not just frogs, but also crocs, snakes, centipedes, tarantulas, turtles, and birds!  Back in 1972, when "Frogs" was released, pollution was a major social cause.  Remember the Indian who cried when seeing garbage littering the fruited plains?  Pesticides and discarded Coke cans touched our social conscious. What if nature fought back? The answer is dramatized in today's film...in very icky fashion. 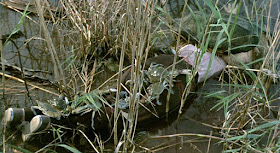 Plantation patriarch, Jason (Ray Milland) invites his closest relatives and friends to his annual July 4th celebration on his island estate.  The guests come as they desire to be kept in Jason's will.  Jason loves his Louisiana compound and keeps it critter free with pesticides and poison.  Enter, don't ask how, Pickett (Sam Elliott), a photographer doing a shoot on pollution.  He is invited to join the celebration, making the very pretty blonde Karen (Joan Van Ark) happy.  The two hit it off.  Uh oh, the critters are acting strange.  Frogs are trying to kamikaze through the windows and snakes are hanging from chandeliers. 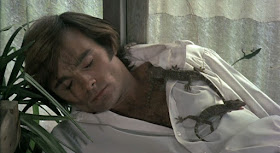 The carnage starts in icky fashion. Jason's maintenance man is found face down in a snake pit, and one of Jason's nephews is overwhelmed with tarantulas as he treks through the swamp.  The kills get ickier and ickier.  More family members are done in...some by lizards...some by leeches...some by crocs...some by turtles.  As Pickett and Karen make more goo-goo eyes at each other, the two realize that it is time to get out of Dodge.  But wait!  The reptiles and their friends don't want them to leave, and now they seem to be at the top of the food chain.  As escape attempts end in carnage for the humans, our two lovebirds must come up with a better plan to escape a slimy demise. 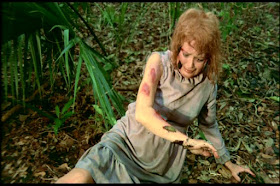 Is the critter rebellion confined to Jason's island?  Can true love survive this icky threat?  Would a more practical recycling program have helped avoid this predicament?  The kills are...well, let's use that word again...icky.  Both Elliott and Van Ark provide some nice eye candy in this weird horror story directed by George McCowan.  "Frogs" is one of those films which will get you scratching at imaginary itches for days to come.