Seance on a Wet Afternoon, A Paranormal Kidnapping

Exactly what is a victim-less crime?  To the victim, there is no such thing.  To the perpetrator?  He would suggest if the potential victim isn't hurt and no money is taken.  What if the perpetrator isn't the pillar of sanity in our society? Perhaps the perpetrator has a frame of reference that extends beyond our known world, and into the after-life.  Now that question becomes complicated.  When schmucks don't intend for anyone to get hurt, one can be sure a bloodbath is imminent. However sweet and harmless Myra (Kim Stanley) and Billy (Richard Attenborough) seem, their well meaning foray into crime is headed for a deadly conclusion.  Hence 1964's "Seance on a Wet Afternoon." 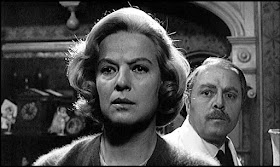 Myra wears the pants in this household.  Billy is brow beaten and has no cajones.  His asthma prevents him from working and Myra is quick to remind him how much he needs her and how she has all the brains in their relationship.  Myra is a medium (she contacts the dead). Myra is convinced her abilities are real and believes she and Billy should be properly compensated by society. The plan: Kidnap Amanda (Judith Donner), the 10 year old daughter of a rich couple.  Part two, Myra will offer her services to the Claytons (Mark Eden and Nanette Newman) and use seances to help the cops find Amanda.  Brilliant!  What could go wrong? 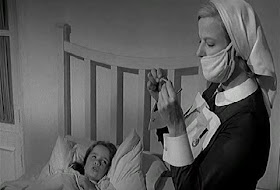 The kidnapping succeeds.  Billy has second thoughts and wants to return the girl.  They keep the girl in Arthur's room and make Amanda think it is a hospital.  Wait!  Who is Arthur?  Ahhh, the deceased child of Myra and Billy who now is Myra's guide on the "other side."  Everything appears to be going to plan.  The cops are suspicious but Myra is cool.  Mrs. Clayton even comes to the house, not realizing Amanda is drugged in an upstairs room.  No spoilers here, but weirdness sets into the plot.  Is Myra a legitimate medium?  What is the backstory on Arthur?  As Myra's sanity sails into the netherworld, we gauge that Amanda's life may be in peril. 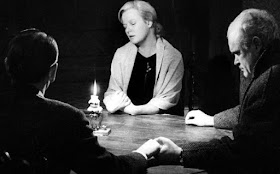 Myra's sanity and Billy's ability to listen to his own conscience are central to this plot.  Though we don't see much of the cops, it is apparent that they are on this case and doing a good job.  Myra's final seance is heartbreaking, if not horrifying as awful truths are revealed.  This film pops up on Bravo or TCM, and is available in good quality on YouTube.  Creepy, and uncomfortable, treat yourself to "Seance on a Wet Afternoon," directed by Bryce Forbes.
Christopher Zisi at 1:26 AM
Share