We have all waited for so long for someone to create a film that blends the elements of "Women's Prison Massacre" and "Sharknado."  Wait no more! 2015's "Sharkansas Women's Prison Massacre" is here.  Directed by one of this blog's favorites, Jim Wynorsky (Chopping Mall), this film satisfies on so many fronts.  Instead of summarizing all the gratuitous scenes here, I'll intersperse them throughout this review in a subliminal manner.  So if you like beautiful women, shark carnage, and cat-fights...hold on for a great ride. 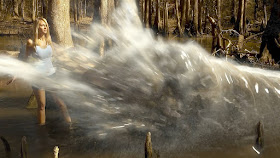 Fracking in Arkansas opens up a portal connecting swamps to a vast undersea ocean...it happens.  Prehistoric sharks instantly begin feasting.  Uh oh, a chain gang from the women's prison has arrived to clear stumps from some ...{Gratuitous wet t-shirt scene}... swamp land.  Anita (Cindy Lucas), Michelle (Christine Nguyen), Shannon (Amy Holt), Sarah (Skye McDonald), and Samantha (Tabitha Marie) are all beautiful (more beautiful than Steve McQueen and Dustin Hoffman in "Papillon"), shapely convicts clad in shorts and tight tops.  Don't get too attached to Samantha, as she will be the first to be eaten as she washes in a stream.  Uh oh....Anita's lesbian lover, Honey (Dominique Swain) arrives to spring her.  Honey, clad in red leather pants and a tight top gets the jump on the guard, Carl (John Callahan), and commandeers ...{Gratuitous Lesbian Kissing}... the van. Honey brings the, now four sexy inmates, and Carl to a house in the woods. 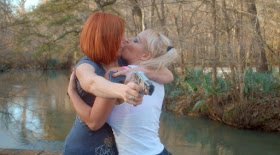 Meanwhile, Detective Peterson (Traci Lords) and her ...{Gratuitous Cat Fight}... sidekicks end up on their tail. At their hideaway ...{Gratuitous Bikini Scene}...Honey and Anita bully their sexy hostages as Carl remains tied up.  Uh oh....Sarah decides to explore the woods.  Poor Sarah, she will die of blood loss after having her leg bitten off.  Now the girls and Carl figure out they are being stalked ...{Gratuitous hot-tub scene}...by sharks.  Double uh oh, these fiends can swim through sand and dirt and encircle the hideaway ...{More gratuitous cat-fighting}...  Here is where it gets good.  Michelle ...{Gratuitous hot-Asian with Machine Gun scene}...finds a stash of machine guns, and her and Carl take charge.  Now machine gun wielding Michelle and Carl lead the babes in an escape attempt.
Michelle emerges as our favorite in this film as her proclivity to get into cat-fights and wielding machine guns are the stuff cheesy graphic-novel heroines are made of. 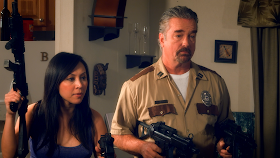 Will Michelle's heroism land her an ...{Gratuitous lesbian make-out scene}... early parole...if she survives, that is?   Will Carl and his babe prisoners overcome these freaks of nature...now that they have machine guns?  "Sharkansas Women's Prison Massacre" is much fun, and titillating.  Do our lovebirds, Anita and Honey, have any more tricks in store for Carl?  All the actresses are quite stunning and Mr. Callahan is terrific as the guard.  For lots of fun, check out this film.  I guarantee you it is an infinitely superior film than Johnny Depp's newest Alice in Wonderland movie.
Christopher Zisi at 12:37 AM
Share