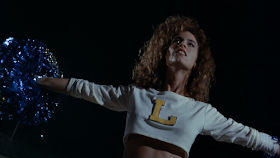 Alison (Betsy Russell) has issues.  Her desire to be beautiful and perfect is giving her some weird dreams...or are they visions.  The pretty high school cheerleader will accompany her team to a cheerleader camp where they will compete against other squads.  Alison's boyfriend is on the squad, Brent (Leif Garrett).  Uh oh, Brent has eyes for any pretty gal that walks by.  Alison senses Brent's two-timing.  All the cheerleaders at the camp are perfect tens...except for rival Suzy (Krista Pflanzer), who is a 12. During a gratuitous sunbathing scene, Suzy tosses her bikini top, beginning a very gratuitous competition.  Brent is hooked by this vixen.  When Suzy is found in her cabin with her blood drained, we begin to suspect Alison.  Alison can't remember where she was when Suzy was killed, and as other cheerleaders are pureed, her memory gets sketchier.  Her friend, the mascot Cory (Lucinda Dickey) wants to believe Alison isn't the killer, but has many suspicions. 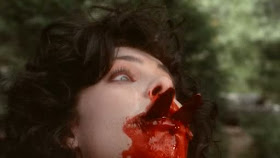 When Alison won't have pre-marital sex with Brent, Brent turns his attention to Pam (Teri Weigel). Poor Pam, also a team-mate of Alison, will soon have a hedge-clipper shoved through her head. As the murders occur, we are treated to some gratuitous scenes featuring pre-marital sex, cheerleaders dressing, more bikini shots, and more nude shots.  As more and more beauties are slain, only Alison has a motive to kill each of them.  An ax, a meat-cleaver, garden equipment, a bear-trap, a gun, and a van will all be used to remove any competition or difficulty that may come into Alison's path.  Is Alison the psycho...or is that too easy?  As the end of the week-end creeps closer, a queen will be crowned to compete in a Miss Cheerleader Pageant.  If Alison is not crowned, will the winner also be mangled? 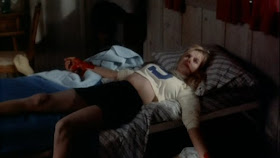 c
Gratuitous is the operable word here, but neat kills and gore are not sacrificed. The cast is most attractive, unfortunately many of them will also be bloody corpses before the end credits.  This film was released in the late 1980s, during the end of the golden age of slasher films.  No matter, whether a demented morality tale, or a bloody horror film, "Cheerleader Camp" satisfies on so many levels, especially if you never made your high school cheer squad. This film is available in good quality on YouTube.
Christopher Zisi at 6:33 AM
Share