1977's "Fraulein Devil" may be said to be a seedy remake of the great Burt Lancaster film, "The Train." After all, there is a train, there is French resistance seeking to blow it up, and a lot of German soldiers shooting machine guns.  Our feature also has a sultry, but evil SS officer and seven of the most attractive female German soldiers from WW2.  Made in France, "Fraulein Devil" teeters between a Euro-Trash piece and a campy war movie. 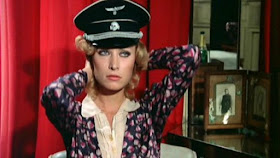 Elsa (Malisa Longo) is the aforementioned SS officer put in charge of a diabolical plan to raise morale of the troops and uncover Germans sympathetic to the French resistance. After a rigorous screening process, she selects seven German military babes to act as women of pleasure on a train.  The girls will provide pleasures to German officers on the front lines and also try to ascertain their loyalty to the Fuhrer.  If during pillow talk, an officer expresses non loyal sentiments to the Third Reich, he will be executed.  Liselotte (Patrizia Gori) is one of the selected babes.  Unbeknownst to Elsa, she is also a spy for the resistance. 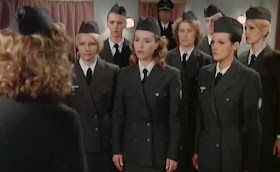 As our women do their jobs, traitors are weeded out and shot.  Elsa is good at her job and soon suspects one of her girls is a traitor.  Uh oh, Lisolette falls in love with Elsa's boyfriend, Major Frantz (Olivier Mathot). The pretty spy recruits Frantz to assist the resistance. With Elsa's jealousy and paranoia, it is only a mater of time until she is wise to Liselotte.  The allies are getting closer and the resistance is making great strides.  Elsa's days of evil queen over occupied France are dwindling. Sensing the end is near, Elsa is bent on inflicting excruciating torture on those betraying the father-land. 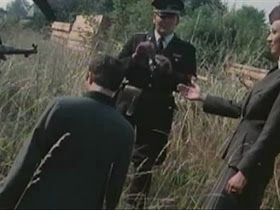 Will the heroic Liselotte become a play toy for the sadistic Elsa?   Will the romance between Frantz and Liselotte survive the final days of German occupation? Will "Fraulein Devil" make French film audiences forget about "The Train"? Seedy and exploitative, for sure, our film today works nicely as a minor war film touching on our prurient tastes.
Christopher Zisi at 2:52 AM
Share