The Fury, ESP, Telekinesis, and the Paranoid 1970s

How many of you remember the 1970s? The Nixon Administration soured us all on politicians. President Carter was seeing UFOs. The CIA, in order to keep up with the KGB, was experimenting with schmucks who they perceived had ESP (...this last one is merely a theory).  On the horror film side, Brian DePalma made Stephen King's best-seller "Carrie" into a box office smash. In 1978, Gerald Ford was contemplating another run for the White House and Brian DePalma put out another horror film, "The Fury." 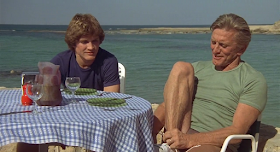 A super secret government agency is creating a new weapon. The Soviets and the Chinese don't have one, but Ben Childress (John Cassavetes) heads the program to create a weapon out of highly telekinetic Americans. Uh oh, Robyn (Andrew Stevens) is one such schmuck. Robyn is the son of Peter (Kirk Douglas), a secret squirrel for this agency.  Ben wants to turn Robyn into a killing machine, but first must kill his dad. Killing Kirk Douglas fails, but he abducts Robyn and indeed turns him into a demented killing machine...able to kill using psychic abilities.  Peter now spends every waking moment trying to recover his son, not realizing his son is something different now. 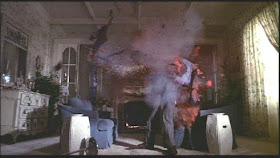 Enter Gillian (Amy Irving).  She has come to the attention of Ben and his demented agency. She can make people bleed (bleed a lot, actually)  by touching them. She also has visions and ESP moments during these episodes. To protect national security, Ben seeks to abduct Gillian before the Communists do, and match her with Robyn, thereby creating a telekinetic death weapon.  This won't be easy, as Robyn and Gillian become linked, and together...well....beware.  As Peter gets closer to finding his son, Robyn and Gillian become increasingly unstable.  In one very gory scene, Fiona Lewis gets on their bad side and is made to demonstrates how many orifices the human being can bleed from. 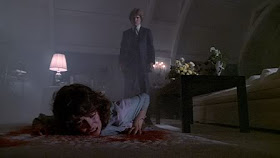 Will Peter and his son be reunited, or is Robyn too far gone?  Will the weapon Ben has in mind do more damage to the U.S. intelligence community than it will to the Soviets? Will congress cut funding to this super-secret agency, or increase it after Cuba steps up their involvement in Angola (ah yes...the 1970s).  Look closely for Daryl Hannah and James Belushi, and enjoy "The Fury," now on Netflix.
Christopher Zisi at 6:41 AM
Share