Battle Royale II, The Rise of the Children.

After "Battle Royale," is anyone really up for another 40 or so children being murdered in bloody spectacle? Yeah...me too. Hence, 2003's "Batle Royale II," complete with spurting blood from jugular veins, dozens of great looking middle-school adolescents meeting their demise in bloody fashion, and....dozens of Japanese special forces troops also being pureed.  The game must go on....and this Battle Royale is just a bit different, though no less violent. 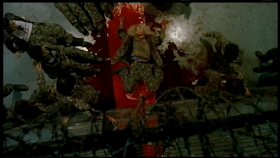 Okay, instead of the Battle Royale emanating from education reform (who isn't for education reform?), this one, known as BR2, emanates from Japan's Millennium Anti-Terrorism Act (who isn't against terrorism?). Surviving from the last Battle Royale is Shuya Nanahara (Tatsuya Fujiwara). Not a happy soul after being forced to murder his classmates, he becomes a terrorist who has waged war on adults. He, and his group, Wild 7, have blown up lots of buildings murdering lots of adults...and children. Japan wants this worthy foe exterminated.  Enter a middle-school class of 40, filled with delinquent children. 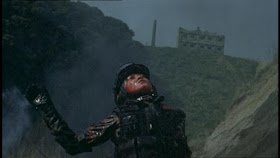 The new game has this reluctant class armed with automatic weapons, and fitted with explosive necklaces, set loose on the island Shuya is hiding.  The class must kill Shuya, or else they will all be killed.  The children land on the island and are beset by machine-gun fire and bombs. This scene is cut right out of "Saving Private Ryan." Shuya and his minions have no idea they are mowing down children, believing it is the Japanese army. With only a few survivors, Shuya implores them to join his cause in the war against grown-ups (sort of a demented Peter Pan). They do, and Japan sends in the marines.  All out war ensues, and the blood flies, spurts, and gushes. Can there be a truce? Nope. What is the end game for Wild 7, if they survive? 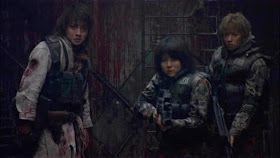 This sequel brings up new questions. Have our sweet children become the monsters that they are indeed fighting?  Has our failure as a civilized society to protect our children from violence begat a fate too evil to turn back from? Or is this just a really violent exploitation film? You decide, and enjoy.  "Battle Royale II" is available on Netflix. Yeah...I know...you heroic middle school teachers out there are saying, "I know those kids."
Christopher Zisi at 12:28 AM
Share