Spurting blood from jugular veins! Arrows through necks! Axes in heads! Cute adolescent girls mowed down by machine-gun fire! Decapitations! Grenade in a mouth! Shocking when all this carnage is inflicted on a middle-school class....by classmates.  2000's "Battle Royale" may be an over-the-top exploitation film (...the Japanese are great at these).  Or....perhaps this grouchy uncle to "The Hunger Games" is biting social commentary regarding how society is devolving in it's treatment of children.  You decide...but for lots of gore, killing, and exploitation...."Battle Royale." 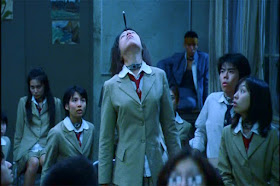 In one shocking scene in a lighthouse, several cute young girls, seemingly friends, suddenly turn on one another with weapons, thereby turning each other into bloody corpses. See, "The Millennium Education Reform Act" mandates a school class be randomly picked to participate in the Battle Royale. Crime is out of control in Japan and so is unemployment. Youth crime is skyrocketing, and desperate problems give way to desperate government solutions. Our middle-school class is filled with great looking kids, and only one survivor will emerge.  The kids are brought to an isolated island, given weapons and explosive necklaces and ordered to kill.  If the kids do not kill, the necklaces will blow their heads off. 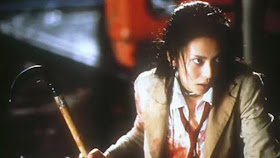 Oh yes...some ringers have been transferred into this class. A psycho-killer kid and a survivor of a previous Battle Royale.  With a bloody backdrop, Nanahara (Tatsuya Fujiwara) and Noriko (Aki Maeda) form a cute bond (puppy love?). Other groups form, but can anyone trust the others in his or her groups? Probably not, after all, only one will be allowed to survive.  The more gentle of the children are murdered almost immediately.  The truly evil among them seem to have an advantage. Can our two lovebirds plot a strategy to avoid their murderous friends and also survive?  The odds are not in their favor, and the blood baths taking place around them suggest this task will be impossible. 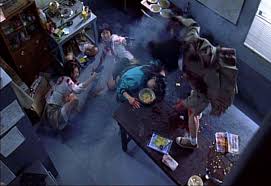 Ahhh, but wait! Some of these adolescents are really smart.  Their island tormentors, the keepers of the Battle Royale, may have some vulnerabilities themselves.  The class of 43 is soon whittled down to single digits, as we see all the gory killings.  Take this film as you like, but it is bloody and violent and very uncomfortable.  Available on Netflix, I maintain this is an important film from Japan.
Christopher Zisi at 12:18 AM
Share