Altered, What's That on your Intestine?

We all know them.  Perhaps none of us take them seriously. They have short attention spans. Holding a job is almost impossible to these guys. They don't get our humor.  Occasionally they have emotional outbursts.  ADD...ADHD...PTSD....Lactose intolerant...yep. These chosen few...were indeed chosen..by aliens.  The abducted community.  They were beamed up into UFOs and experimented on.  Upon their return to Earth, they tried telling the truth...which only got them medicated or institutionalized.  But someday...all of us will know we should have listened to their warnings.  From the director of "The Blair Witch Project," Eduardo Sanchez, today's feature from 2006, "Altered." 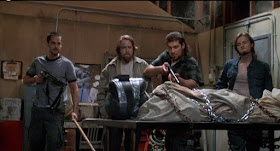 15 years ago a bunch of good ole boys from rural Florida were abducted by aliens and experimented on.  Most of the schmucks were cut loose on the first day, but not Wyatt (Adam Kaufman). Wyatt was special, he merited extra attention. Our aliens even implanted a tracking device in his intestine before setting him loose. Upon being set free,our fiercely independent yokel operated on himself with a hunting knife and removed the device from his innards. Here is where our film begins, our good ole boys want to exact vengeance on the aliens who abducted them....bad idea. By pure luck they capture one, but have no plan what to do with it.  Otis (Michael C. Williams), Duke (Brad William Henke) and Cody (Paul McCarthy) bring it to Wyatt.

Wyatt ain't thrilled to see this thing as he is doing his best to forget what happened to him 15 years ago.  Uh oh....the wounded creature knows Wyatt and reacts violently.  See, whatever the aliens did to Wyatt, they altered him, made him most dangerous to their survival.  Wyatt goes right to work knowing the monster has a tracking device. Wyatt cuts it out of him letting us see alien intestines. This just ticks off our antagonist and it soon escapes and attempts to heap it's own vengeance on it's human tormentors.  The thing is mean and after Cody is infected by an alien scratch, we witness a most gruesome deterioration. Wyatt knows a painful truth.  If they kill the ugly thing, the aliens will wipe out Florida and maybe parts of Georgia. 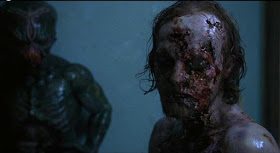 As war escalates in this rural garage of Wyatt's, is there victory? Kill it and live....for a few minutes. Or be killed.  Wyatt must come up with a plan while his friends are having their organs ripped out. This is a moody, grim, and action packed horror/scifi film.  The acting is great and the gore is at a maximum level. So for Heaven's sake, if you know someone like Wyatt, take their advice and WATCH THE SKIES and "Altered."
Christopher Zisi at 6:48 AM
Share