Last month we looked at Joe D'Amato's "Anthropophagus." Today we examine this Italian horror director's follow up to that film. Though the gore is as intense as his earlier film, D'Amato has created a blood curdling rip-off to the American horror classic "Halloween." Complete with a 'boogey man' who doesn't seem to die, a mysterious stranger in pursuit, and synthesizer musical score, 1981's "Absurd" is a jewel for slasher film fans. Oh yes...like "Halloween," the last 30 seconds is classic!
As our film begins, Mikos (George Eastman), a monstrous slasher, splits his intestines open as he is being pursued by a weird priest (Edmund Purdom). Expected to die, the operating surgeon notices that Mikos' blood coagulates at superhuman speed, and he heals.  While recuperating, Mikos drills through the head of his pretty nurse and flees the hospital. Sgt. Engleman (Charles Borromel) joins forces with the priest pursuing our maniac.  The priest is also a chemist and lets the cop know that Mikos escaped from the church's lab (who knew they had those?), and is invincible except for the brain.  For some unknown reason, Mikos makes his way to the Bennett house, where young Katia (Katya Berger) is confined to her bed recovering from spinal surgery.

On the way to the home, Mikos knocks off some poor schmucks in most gory fashion. One unfortunate is done in by a table saw in an elongated and bloody scene. Our priest/cop duo are in pursuit but have no idea where he is.  With the Bennett parents at a Super Bowl party (Rams-Steelers), pretty Peggy (Cindy Leadbetter) is watching over Katia and her little brother. Like the nurses in this film, she will not fare well. As the Rams intercept Bradshaw, Mikos arrives at the Bennett home and cooks Katia's nurse, Emily (Annie Belle). Uh oh...paralyzed Katia will have to think fast and man up to survive this fiend and also save her brother. 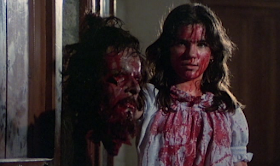 Why is Mikos so bent on destroying the Bennett family? Does a bed-ridden Katia have any tricks up her sleeve...or sharp objects that can pierce a cranium? Will Bradshaw stop making mistakes and engineer a fourth quarter comeback?  With apologies to my nurse friends out there, "Absurd" is a terrific horror film...even though much of the plot is a carbon copy of "Halloween." Available on YouTube, enjoy this Italian classic.
Christopher Zisi at 4:41 AM
Share