Beowulf, ....the one with Rhona Mitra

An epic poem, written over 1000 years ago, "Beowulf."  Re-told many times, especially on film. Michael Crichton even took his turn with his book "Eaters of the Dead."  True horror, this tale has monsters, gore, and epic battle.  Today we look at Graham Baker's 1999 version of "Beowulf" which stars two of my favorites, Christopher Lambert and Rhona Mitra.  Throw in a loud synthesizer-rock score, and some great one-liners, and oh yes...a mean monster, and some great sexual tension between Lambert and Mitra, and we have a perfect entry for this blog.  Set in Scandinavia, filmed in Romania, this "Beowulf" prioritizes the horror aspect of this ancient tale.

Beowulf (Lambert) arrives at an outpost under siege.  An invading army wants everyone in the place dead, but will not enter it as something evil is doing the job for them.  With some neat armaments, Beowulf decimates half the army to reach the outpost.  The outpost is headed by Hrothgar (Oliver Cotton), and the inhabitants are suspicious of their new guest.  Every night, a fiend manifests and murders the residents inside this stronghold.  As it turns out, Beowulf seeks this creature, and is bent on destroying it.  Kyra (Mitra), Hrothgar's daughter, is initially hostile to Beowulf, and informs the protagonist no man can kill the thing.  Beowulf informs her, "I am not like other men."  Her response, "...that, you'll have to prove." 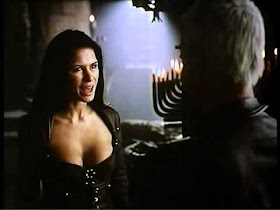 By the way, he will prove this....in a few different ways...which pleases Kyra.  Initially, the plight to kill the monster does not go well, but Beowulf is clever.  The monster seems to have a method to it's madness which is connected to the sordid pasts of the residents of the outpost, especially Hrothgar. As Kyra and Beowulf's relationship gets increasingly steamy, the monster increases his attacks and the casualty count skyrockets.  But wait!  Is the monster really the biggest threat to Beowulf and the outpost? Who is the really sexy seductress (Layla Roberts) who haunts Hrothgar? Will Beowulf have time for some pre-marital sex with Kyra? 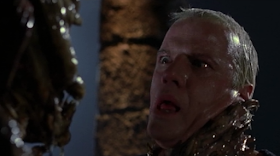 No staleness or dull moments here, even though this tale is based on a poem written over a millennium ago.  Fast moving, and quite alluring, the 1999 version of "Beowulf" is a lot of fun and very witty.  As Kyra tells Beowulf, after he tells her that she is not evil, "...maybe not, but tonight I'm full of magic."  Available on Netflix, watch this magical tale.
Christopher Zisi at 4:33 AM
Share