Infini, Yep...Man is the Warmest Place to Hide

From Australia comes a wonderfully ambitious and gory scifi/horror work.  I may be the only one to make this connection, but 2015's "Infini" is kind of like "John Carpenter's The Thing" taken in a bit of a different direction. The plot will grab you, take you on a wild ride...then will leave you thinking long after the final credits.  With great f/x and cast (includes some of my favorites like Grace Huang and Daniel MacPherson), get ready for a voyage to the outermost dive of the universe. 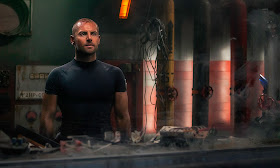 OI Infini is a mining colony at the farthest end of the universe.  A new element is mined there....but wait...it ain't really an element. Something awful happened there...everyone died a most grizzly death.  The tactical team sent there to investigate did not fare well (...to say the least), and another team is sent to recover the lone survivor, Whit (MacPherson) and divert a payload being sent to Earth.  With some Einstein type time bending technology, the trip there is almost instantaneous.  The team arrives to a frozen base of corpses, weird experiments, and blood-splattered walls. Barricaded in a control room is their mission objective, Whit.  Finding Whit alive is the good new, but what he has to tell the rescuers won't make their day. The team is able to restore the electronics and as the heat is turned back on, all the blood and gore thaw out....as does something else.

That ore being mined?  Not ore, but a life form just waiting for a thaw.  The newly defrosted menace takes over humans, changes them, and turns them into violent mutated fiends. Unfortunately for our tactical team....other survivors exist...and they're not human anymore. Now the team members are getting infected (..if that is the right word), and Whit must survive and stop the payload of alien ore from reaching Earth.  Grace Huang plays the team medic and her fate will be most disturbing, I'm afraid...or will it?  As each member of the team gets infected, we the viewer are expecting an ending like "The Thing" where Childs and MacReady had their stand-off.  But no!  What we get is something way more complicated and philosophical.  No spoilers here.

Does good have a chance against evil?  Can an alien life form even begin to understand it's human prey? We'll see. Masterfully directed by Shane Abbess, the imagery in "Infini" conjures up memories of "Event Horizon."  All scifi and all horror, "Infini" has just hit Netflix.  This is the type of film that will give you nightmares, but if you're like me....that's a good thing.