A Girl Walks Home Alone at Night, Vampire in Iran

The plight of a vampire.  It lives at night, in the shadows.  The undead being must remain hidden from authorities and the prevalent culture.  Destined to be forever lonely, this monster from literature has always drawn our sympathies...and for certain benign outcasts, empathy, as well.  Buried, not too deep, inside Iran, is a culture of youth...hungering for political, economic, social, and religious freedom.  Like the vampire....this growing culture must also remain purloined.  Unlike the vampire, this burgeoning culture will someday break into the light.  Ana Lily Amirpour has crafted "A Girl Walks Home Alone at Night," which tells the story of a female vampire plying her trade inside Iran. Though shot near Bakersfield, California, Ms. Amirpour introduces us to that Iranian (...Persian?) culture who seeks the same happiness we do in North America. 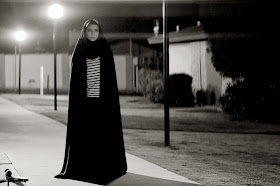 Don't pay too much attention to the dried up river serving as a mass grave, running through the center of town....a symbol or metaphor, no doubt tangled with this plot.  Arash (Arash Marandi) is a hard working hunk trying to make it in Bad City, Iran.  He cares for his addict dad (Marshall Manesh) while staying under the radar, as best one can in Iran.  Uh oh, Saeed (Dominic Rains), the pimp drug dealer demands Arash pay him for his dad's habit.  For payment, Saeed takes Arash's prized possession, a meticulously preserved 1950's car. Enter the vampire (Sheila Vand).  Living repressed inside Iran, like so many other women, in the shadows she listens to western rock, adorns her apartment with posters of western culture pop-icons, and loves Lionel Ritchie music.  Oh yes, she prowls the streets at night looking for nourishment (blood).  She is evil.  Or is she? 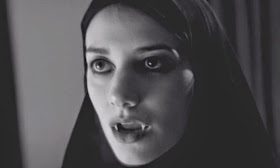 Her first kill is Saeed, which in some way liberates Arash.  Her victims are hopeless souls, as she is attracted to Arash...perhaps because he stands out as a symbol of a pristine future.  As the two protagonists head toward a forbidden relationship, the viewer is left to contrast that relationship with the repressive society they exist in.  As more and more bodies are added to the aforementioned mass grave, Arash's attraction for the vampire grows.  Oddly enough, the more active our vampire gets, the more Arash is liberated from his careful existence.  Though safe from the vampire's bite, because of her attraction to him, Arash must go through an inner metamorphosis in order to secure the girl (...vampire) of his dreams.  Ms. Amirpour's style blends elements of David Lynch and Coen Brothers' films.

Perhaps our alluring vampire serves as hope for a culture living inside Iran.  Maybe Ms. Amirpour, in her heroine, has created a character that embodies what it will take to free the hopeful youth of Iran (...Persia?).  Available on Netflix, this stylish horror flick shows a hidden culture of Iran that serves as a great hope for its future.  Let us all hope that in the not-too-distant future, the young people of Iran will serve as an inspiration to the repressed everywhere.
Christopher Zisi at 12:01 AM
Share