3 Dead Girls, and the Psychos Who Loved Them!

"It's wrong, it's wrong, it's wrong....why would you ever want to make this film?"  This question was commonly thrown at Christopher Alan Broadstone regarding "Scream for Me," one of the three short films in 2007's "3 Dead Girls."  Pushing the envelope, being provocative, and exploring the controversial seem to be three pillars of this DVD...and if you know me (...and this blog), make Mr. Broadstone my type of guy.  "3 Dead Girls" combines three award winning shorts into an anthology which is available on Amazon.com.  With over a dozen film awards to his credit, the indie filmmaker explores the darkest side of the human psyche in this trio of works. 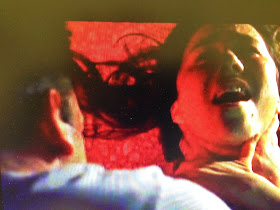 Dark, low-budget, hard-to-watch, and dimly lit all are ingredients that the hardcore horror fan values.  Perhaps our id is stroked by these attributes.  In any event, we are discouraged to speak of these works (...like "3 Dead Girls") in so-called polite company.  But here...on this blog...let's talk away!  In "Scream for Me," Irene (Lora Martinez-Cunningham) is having a bad day...her last day.  She is being strangled by Garrott (Gabriel Sigal) who is ready to get off on her screams.  Uh oh...she is determined not to scream.  Close to death, but not yet screaming, Irene is revived to endure more of this torture, as Garrott demands a scream.  Mercifully, Irene passes.  In death, perhaps she achieved victory over her tormentor.  Unfortunately for Garrott, he is not the worst madman in this film.  Instantly after Irene's death, an ultimate psycho (Tony Simmons) barges into the room, and Garrott will now assume the role of victim (perhaps a bad descriptor). What happens when you beat a psycho to the punch?  Garrott is about to find out. 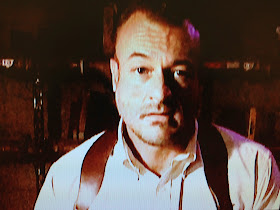 In "Human No More" we explore what happens to a human being when all that he loves is destroyed.  Also starring Tony Simmons, this time as a detective set to interrogate the devil who murdered his wife and young child.  Perhaps the most frightening part of "Human No More" is that what he becomes....is human...though a darker version of who he used to be.  In "My Skin," Tony Simmons plays Mr. Death.  Death is a meticulous and anal sort, and when his schedule and books are messed with...well..there'll be Hell to pay.  Cindy (Lisa Montague) lays dead, just murdered by her husband.  Cindy will have the last laugh, though on the other side of eternity, as Death decides to deal with her murderous spouse.  See...it wasn't Cindy's time to go, and Death is a busy sort.  Committing the ultimate crime has consequences far beyond the legal system. 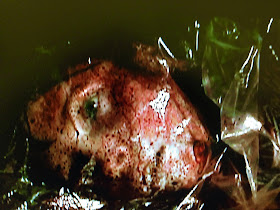 Though we see Tony Simmons in three different roles, we have to look closely to realize it is the same actor.  Mr. Simmons does a fine job portraying some extreme sorts.  Though the women don't fare well in any of these tales, we also need to tip our hats to Lora Martinez-Cunningham.  In my skin, she endures a beating in which no actress has had to endure even in a full length feature.  I also want to point out the music...it is spot on, energetic, and first-rate (Mr. Broadstone is also a musician).  This work is dark, frightening, stomach turning, and not for everyone.  If you are up to the challenge, see "3 Dead Girls."  Check out Mr. Broadstone and his production company at www.blackcabproductions.com.
Christopher Zisi at 12:02 AM
Share