Surprisingly, this is the first time I have featured a Katharine Isabelle film on this blog.  If you thought she snapped in "Ginger Snaps," you haven't seen nothing yet!  in 2014's "88," Ms. Isabelle excels in what may appear to be two entirely different roles.  Is she a psychopathic, brutal killer...or a diminutive damsel in much distress?  Directed by April Mullen, and written by Tim Doiron (both have roles in the film), "88" takes us for quite a ride.

As our story begins, a very frightened Gwen (Isabelle) enters a diner.  Her hand is messed up and she is completely disheveled.  Gwen has no idea who she really is or how she arrived at the diner.  She is more shocked to find a gun in her purse and accidentally shoots a waitress, and is now on the run from the cops.  But wait!  She is already on the run from the cops...for lots of killings.  Through flashbacks, Gwen's story is filled in for us, one bloody chapter at a time.  We are able to infer that a thug named Cyrus (Christopher Lloyd) is pursuing her...but why?  As parts of her memory come back, she revisits familiar places only to find blood and corpses. 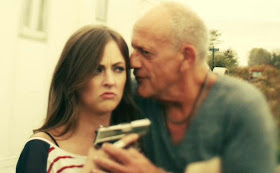 Now fleeing cops and thugs, Gwen must try to put random puzzle pieces together to figure out who the good guys and bad guys are.  When she realizes that the love of her life, Aster (Kyle Schmid) was murdered by Cyrus, Gwen turns back into a psychopath to hunt down this nemesis, before he tracks her down.  Lots of schmucks get in the way, and none of them fare well. However dear her old acquaintances may have been to her, with vengeance as her goal, her former friends are now merely a means to kill Cyrus. 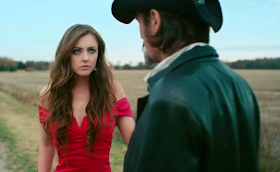 Nothing is as easy as it appears in "88," and Gwen will go through some gut-wrenching realizations before her quest is completed.  The violence and plot may remind you of "Pulp Fiction" or "Kill Bill," but Ms. Mullen and Mr. Doiron have crafted an entirely different film.  We, the gullible viewer, are simultaneously cheering for Gwen, and horrified by her.  The amnesia plot device allows Ms. Isabelle to show us two entirely different characters, which will meet up in heartbreaking fashion as the credits roll.  Available on Netflix, there is so much to enjoy about "88."