Critics of the horror genre are quick to remind us that our favorite movies scar children with horrific images, causing nightmares and dysfunction.  Horror enthusiasts retort that popular nursery rhymes told to children by their loving parents deliver even more horrific imagery than vampires or werewolves.  After all, won't an inquisitive child wonder what may have happened to Snow White if the dwarfs were malevolent?  ...or, what exactly did Rumpelstiltskin have in mind in his abduction of Repunzel.  Actually asking mommy or daddy for those answers would draw some stern looks.  So today, we look at a nursery inspired slasher tale from 1996, "Pinocchio's Revenge." 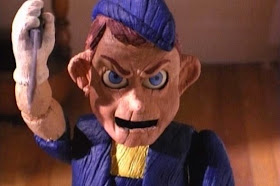 Vincent Gotto is arrested after a patrolman comes across him burying his 10 year old child.  Gotto strangled his son to death...but why?  The only clue to the motive is that Gotto (Lewis Van Beigen) buried his son along with a wooden Pinocchio puppet.  Five years later, Gotto is headed to the chair. His defense lawyer, the beautiful Jennifer (Rosalind Allen), is trying to get the courts to overturn the sentence.  Jennifer believes Gotto is innocent, though Gotto insists he is not.  No matter, the switch is pulled.  The alluring Jennifer accidentally brings some evidence home after the execution, including the Pinocchio puppet.  Jennifer's ten year old daughter, Zoe, falls in love with it.  Oh yes, Jennifer works long hours and has a voluptuous, Italian nanny (Candace McKenzie).  The nanny is terrific and likes to take long showers for the camera.  Unfortunately, she will assume the role of a pummeled corpse before the end of the film, so we will not mention her again. 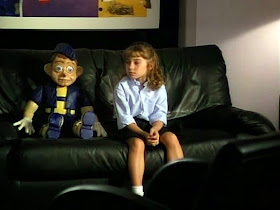 To Jennifer's alarm, Zoe will not part with her new friend.  The stunning divorcee is even more alarmed when she finds Zoe's other dolls and stuffed animal friends smashed and torn to pieces.  Uh oh...Zoe is observed conversing with Pinocchio, and some of her nemesis school friends have mysterious accidents.  After Jennifer's lover (Todd Allen) has an unfortunate accident on the stairs, she gets really suspicious.  Corpses start accumulating, and suspicion focuses on Zoe.  Zoe and Pinocchio have now become inseparable and  Zoe is being wooed by him.  Uh oh (again!)....is Pinocchio the killer?  With the lover and nanny disposed of, only one person stands in the way of Zoe and Pinocchio being together forever...yep...the lovely Jennifer. 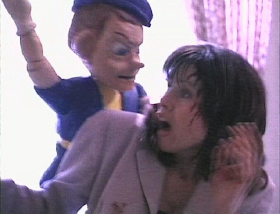 Though the first half of the film is mild 1990s horror, the second half turns dark and gory.  When the final credits roll, you will be saying "Whoa..what the F@#&."  A slasher puppet is scary enough, but the idea of a sweet little child turned psycho...well...now we're really getting scary.  As children, we know what monsters look like and we stay away from them.  What children do not defend against are those sweet images that are put into their brains during bedtime stories.  Those same sweet tales ferment in minds that are still developing, mix with some id, and create really dark dreams.  Gimme vampires, slashers, zombies, and werewolves any day of the week, and you can keep your cute puppets.  "Pinocchio's Revenge" is available on Netflix.
Christopher Zisi at 12:38 AM
Share