The Terror Within, Beware of Amorous Gargoyles

When something deep inside you is calling for a deviant film selection, perhaps to offset a string of romantic comedies you had to endure, a Roger Corman production is always a satisfying choice.  1989's "The Terror Within" stars Andrew Stevens, George Kennedy, and a couple of babes.  Lets face it, nothing says "sure success" as a Roger Corman movie set in an underground lab located in an apocalyptic wasteland, under attack from toothy gargoyle mutants.  This film is sold on a DVD as a companion piece to "Dead Space" (see my review on this blog dated March 19th). 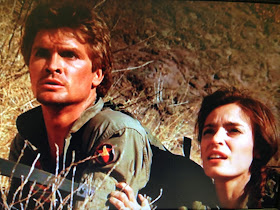 The plot:  A broken test tube leads to the death of 99% of humanity (...it happens...).  Under the Mojave Desert, a CDC lab with six vaccinated survivors are running out of food and water.  On the surface, a mutant gargoyle race is shredding any surviving human they come into contact with.  David (Stevens) and Sue (Starr Andreeff, picture above) head to the surface only to find the remains of their two friends, and a slaughtered commune of survivors.  They also find a traumatized girl who is immune to the deadly plague and bring her back to their lab.  Back at the lab, Hal, the boss (George Kennedy) and Linda (Terri Treas, pictured below) discuss their pregnant guest...one more mouth to feed, and low on supplies.  As Linda tends to the survivor, Karen (Yvonne Saa), it is apparent that the pregnancy is progressing at light speed.  Before the end of the day, Karen goes from three months pregnant to nine.  During delivery, a miniature monster explodes out her belly and darts into the proverbial air vent. 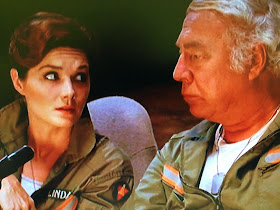 Now our lab team is faced with a rapidly growing monster in the facility that gets off on impregnating beautiful women.  Hal and David order the two babes to remain in the control room (...as if those orders will be obeyed) and each take an expendable lab tech and go searching for this creature.  The two expendables are diced pretty quickly, and when the thing converges on David, Sue runs to his aid.  When the gargoyle sees Sue, it loses interest in David and abducts Sue.  As Hal and David find them, the thing has just raped Sue and when it attacks Hal, David rescues Sue.  With only three survivors, Linda wonders if Sue's pregnant with David's child, or the monster's (...this being a Roger Corman film, the answer is obvious).  As David and Linda believe they have figured out the creature's weakness, and traumatized Sue demands an abortion, a final conflict between man and it's nemesis approaches. 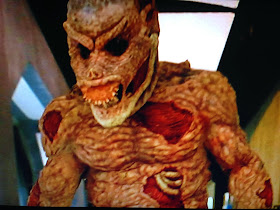 Even if Linda and David defeat this monster rapist, they will have to flee to the surface for food where more of these things wait for them?  Will our good looking duo be able to clear the Mojave Desert of mutant gargoyles?  What will become of the beautiful Sue?  Does "What to Expect When Your Expecting" have a chapter Sue could benefit from?  The acting is good, and creature is menacing (Jack Valan in a neat rubber suit).  Both Treas and Andreeff are stunning as heroic damsels in various forms of distress.  "The Terror Within" is perfect if you want to watch a vintage 1980s horror film.  Even on a low-budget, Corman delivers a very entertaining and visually pleasing work.