The Giant Claw, Terror From a Flying Battleship

Mara Corday is best known by contemporary audiences as the diner waitress who saturated Dirty Harry's coffee with sugar in the "make my day" scene in "Sudden Impact."  However, the 1950s were her glory days.  This striking brunette broke into entertainment as a showgirl on Sunset Boulevard before being discovered by Hollywood.  In addition to being Playboy's Playmate for October 1958, she starred in a number of B movies including "Tarantula" and "Black Scorpion."  Today's feature is my favorite Corday film, 1957's "The Giant Claw," in which she plays the beautiful and genius mathematician, Sally Caldwell. 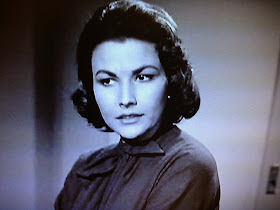 The plot:  Sally is in the Arctic helping the military test radar systems. As she is recording radar type statistics, Mitch (Jeff Morrow) is flying a jet.  Mitch's jet is being used to test the radar stations, and all is going well until Mitch sees a UFO as "big as a battleship" fly over his cockpit.  Exactly how big is a battleship?  Who knows?  Not Sally as she continues to press Mitch about this description throughout the film.  Despite it's size, the UFO fails to show up on radar.  The military's initial reaction is to dismiss Mitch's claim as the rantings of a civilian pilot, but when other pilots report the same phenomenon, and then disappear, General Buskirk takes notice.  For no apparent reason, Mitch and Sally are flown to New York. On this flight, Mitch plants a nice smooch on Sally as she begins to doze off.  Unhampered by 1950s sexual harassment statutes, Mitch is unapologetic...and Sally is hardly offended.  Gotta love the 1950s. 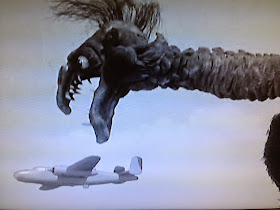 Uh oh, our battleship (big bird, actually) disables the plane and Mitch takes over for an unconscious pilot and crash lands in the Adirondacks.  When the military collects Sally and Mitch from a benevolent French farmer, they are told more planes have turned up missing and it seems to be the work of a monster bird.  Indignant that no one believed him at first, Mitch tells the concerned Sally, "If I called it an overgrown adding machine (instead of a battleship), at least you would've believed me."  When a Civilian Aeronautics Board plane is attacked and crew eaten like sardines in a can, the Air Force dispatches a squadron.  The bird eats them, too.  Mitch and some scientists figure out the bird is protected by a shield of anti-matter, and comes from a distant star.  With Sally figuring out equations, and the bird now attacking cities worldwide, Mitch invents a ray gun that will penetrate an anti-matter field.  With all of the resources under General Buskirk's control, Sally and Mitch are sent to kill the bird before it lays more eggs. 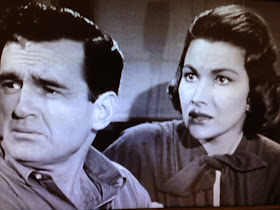 As Mitch and Sally fall further in love, will Mitch reveal to her the true size of a battleship?  Will the wildlife and environmental regulations of the Eisenhower Administration hamper the hunt for our clawed menace? Corday is fantastic and her interplay with Morrow is quite entertaining. In one scene, surprising Mitch, Sally aims a rifle at a giant bird egg.  Before she fills it with holes, Mitch gives her a look of subtle alarm , and Sally says to him, "It's okay, I'm from Montana."  Gotta love that pioneer spirit in our monster movie heroines.  The creature was created by a low-budget Mexican model maker and the stars never saw it until the movie was premiered.  Jeff Morrow was so embarrassed by the thing that he hid his face during the premier.  In 2014, everything about this film is endearing, and sure to entertain.