Oasis of the Zombies, the Violence and Eroticism of Jesus Franco 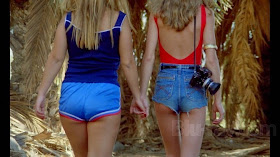 As the film opens, two buxom babes, who may be lesbians (another characteristic of Franco films) get lost driving through a desert in North Africa.  Holding hands (see picture above) they come across an oasis containing battlements of a destroyed Nazi WW2 convoy.  Awakened are Nazi zombies who then grab our girls and eat them.  In 1943, this Nazi convoy carrying millions of dollars worth of gold was ambushed at this oasis.  The only two survivors were one allied and one Nazi commander.  Decades later, these two meet to go back for the gold.  The German Colonel (Eduardo Fajardo) kills his allied partner out of greed and races to the oasis with his hot wife (Lina Romay).  From Europe, the son of the allied commander, Robert (Manuel Gelin) races to North Africa to find the oasis.  He brings his main squeeze, Sylvie (Caroline Audret), who is useless but looks great in short-shorts and white boots.  They meet up with a professor and his assistant, the beautiful Erika (France Lomay). 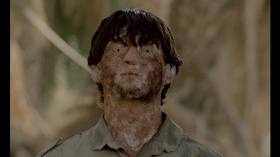 As the Colonel's expedition fails, he makes it back to civilization as a drooling insane mad-man.  His wife, wasn't so lucky, as she was stripped and had her organs ripped out and eaten.  The zombies are cool, and most have worms crawling out of their faces.  Robert ignores the Colonel's rantings about the living dead, and brings his crew to the oasis.  Erika and the professor arrive first and are attacked, but survive.  When Robert, his gal, and team arrive, Erika's spirits improve and she gets naked with one of the male's in the expedition.  As if by cue, her nakedness seems to call the zombies, and they converge.  As the zombies begin munching members of the expedition and pursuing Erika (see picture below), Robert (...with no help from his hot girlfriend) begins to mount a defense.  Then, for a contender in the "Did He Really Say That" award, someone yells "Lets get some bottles and make Molotov cocktails...just like at school."  Which school? 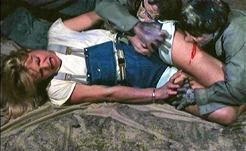