If you enjoyed "Barbarian Queen," make way for Roger Corman's "Deathstalker."  In this 1983 film, Rick Hill portrays Deathstalker, the James Bond of that mythical bygone era.  He grunts well, flexes his pecs, grunts some more, and is great with a big sword.  Barbi Benton, in her best role ever, plays Codille, the helpless damsel. To guarantee a place for this work in my B Movie Hall-of-Fame, Lana Clarkson emerges as Deathstalker's main sidekick. 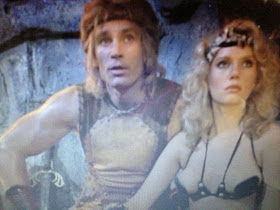 The plot: doesn't really matter, but here goes.  The Evil Munkar controls two of the powers of creation as he possesses the magical amulet and chalice. He seeks overall world domination, but he needs the magic sword for that.  His two powers control life and magic....the sword would allow him to control...well..something else important.  Munkar sends his men to rape and pillage the countryside.  To combat this, a good (but homely) witch recruits Deathstalker, who also rapes and pillages (..but in a benign sort of way), to go to Munkar's castle, kill the evil sorcerer, reclaim the chalice and amulet, and restore happiness throughout the land.  The witch equips Deathstalker with the third piece of this trinity...the magic sword.  A fringe benefit also awaits our hunk, Princess Codille.  She was abducted by Munkar and thrown into his harem. 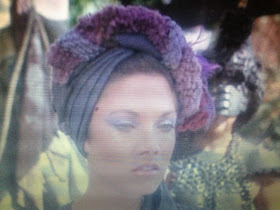 Deathstalker sets out on his journey, and luckily for us, he picks up Kaira (Clarkson) as a sidekick.  She is also terrific with big swords and is usually topless.  Unfortunately for Kaira, Deathstalker is the 007 of this god-forsaken era, and she is killed in an attempt on our hunk's life.  Upon his arrival at Munkar's kingdom, he and other converging warriors enjoy orgies, drink, female mud-wrestling, and carnage.  Munkar appears and lets the warriors know he is hosting a tournament where the warriors will compete against each other to the death and the winner will take away his kingdom (his fingers were crossed when he said that).  Munkar is terrific...he has an evil laugh, jellyfish tattoos on his head, feeds human body parts to his monster pet, and has a great harem. Codille is his selection to be his bride...oh no!  He displays her, half naked, to be groped by all the monster warriors.  Fortunately for her, Deathstalker falls in love with her and is bent on rescuing her. 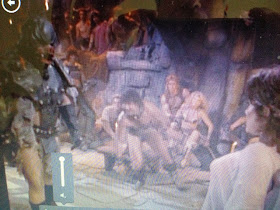 If Deathstalker recovers the chalice and amulet, does he also get Barbi Benton?  Will a world without Munkar mean more clothes for the populace (especially the women)?  Will Roger Corman ever make "Deathstalker meets the Barbarian Queen"?  This movie is filled with gore and nudity...much of it gratuitous.  Trolls, monsters, mud-wrestling, and cat-fights with pillows are used often as plot filler.  If your significant other suggests "Robin Hood: Prince of Thieves" for movie night, save yourself and do "Deathstalker" instead.
Christopher Zisi at 6:11 AM
Share