Excuse the gratuitous title of this blog entry.  However, it is only slightly misleading.  This movie is Swedish, there is a nude figure skater, but she is American figure skating champion Barbara Wilson (you might remember her scene in "The Flesh Eaters" where we saw her fill out a bikini, just before we saw her skeleton fill out that same bikini).  As I am cheering for both Norway and Sweden in the Sochi Olympics, 1958's "Terror In the Midnight Sun," a movie set in northern Sweden, with figure skating and a big hairy ape monster, seems so appropriate for this blog. 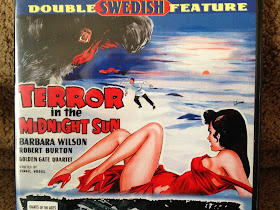 The plot: A UFO crashes into the Laplands of northern Sweden (this film was shot entirely north of the Arctic Circle).  Two renowned scientists, Erik and Dr. Wilson, fly there.  Coincidentally, Dr. Wilson's niece, Diane, is figure skating in that town.  As the brainiacs land there, Diane is performing in front of scores of drooling Swedes.  She and Erik immediately hit it off inspiring Diane to strip out of her skimpy figure skating outfit and take a shower.  Whether this is integral to the plot is probably best left up to the individual viewer to decide.  Erik and Diane flirt, go skiing, dancing, and make goo-goo eyes at each other.  While dancing, a herd of reindeer is murdered in a town north of them. 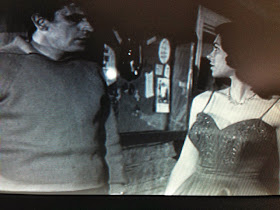 Clad in an elegant evening gown, Diane insists that the military and scientists take her along to investigate.  Once at the scene of the mutilated reindeer, our heroine discovers footprints of a beast that has to be 20 feet tall.  The generals and the scientist then plan a visit to the crater with the UFO.  Diane, clad in evening ware and probably smelling like Chanel #5, forces her way into the planning (see picture below) and onto the plane with them.  At the crater they discover the UFO, occupied by strange ETs.  Erik and Diane try to ski to the nearest town, but an accident ends Diane's skiing days and the two find a rescue cabin.  To the fortune of Erik, Diane takes the opportunity to strip out of her wet clothes and don a blanket.  Whether this is integral to the plot is probably best left up to the viewer to decide.  The ETs then unleash a 20 foot ape to collect Diane, which it does after using an avalanche to knock out Erik. 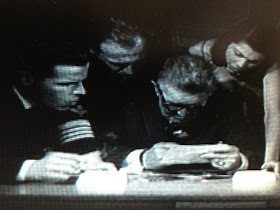 What do the ape and ETs want with Diane?  Right...stupid question.  Will Erik and Dr. Wilson catch up to the ape and rescue Diane?  Will a bum knee end Diane's goodwill tour of the Laplands?  Swedish monster/sci-fi movies are rare, but this is a hidden gem.  The spirited Diane is energetic and pleasant to watch.  Barbara Wilson's performance here probably will influence Swedish figure skating for years to come.
Christopher Zisi at 5:21 AM
Share