The Italian reaction to "Cat-Women of the Moon" was, "we have to top this!"  Hence 1967's "Mission Stardust" featuring the Swedish beauty Essy Persson (Cry of the Banshee, Sadist) as Thora, the alien spaceship commander.  Every decade should have a Cat-Women type of movie and this film holds up well to it's predecessor.  In the 1960's, American film may have attempted to show a liberated woman in control.  However, Italy is a bit old-fashioned, as Thora ultimately gives in to her more carnal desires when introduced to a lower form of species (male Earthlings).

The plot:  A space mission to the moon is headed by Major Perry Rhodan (Lang Jeffries).  It's purpose is to extract a highly atomic element not found on Earth.  Arkin, a master fiend, has a spy in the crew with the goal of stealing the element and holding Earth's superpowers at his will.  The ship is pulled off course by a mysterious force and is landed on the dark-side of the moon where they encounter Thora's massive ship. Once on the ship the domineering Thora reminds the Earthlings how inferior they are and informs them her race could die off if a cure for a disease is not found.  Major Rhodan does what any male member of an inferior race does in these instances, he grabs Thora (who is clad in a leotard which allows her bra to breathe, see picture below) and plants a long juicy lip-lock on her.  Now the two races decide to work together to find the cure for this disease (gotta love those Italian sci-fi movies).  Major Rhodan returns to Earth with his crew, and Thora to visit an African doctor who has a cure.  Waiting for them is the evil Arkin, and his femme fatale staff (Lisa Halvorsen and Ann Smyrner) who want the alien technology to rule the planet.

This is an exciting campy movie which culminates with Thora under attack by the machine-gun wielding Smyrner and Halvorsen.  Of course, Major Rhodan arrives to save the day, much to the furor of the 1960s women's liberation movement here in the States.  In an era where NASA and our government have reduced our space program to an expensive community outreach program, it is a lot of fun to see a movie made when space travel still captivated our imaginations.  One can only hope that we return to those days when a movie like "Gravity" would have been laughed out of the theaters. 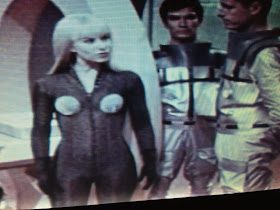 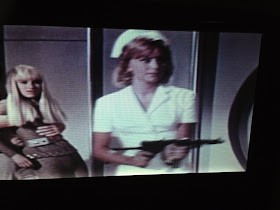