"Very restless, and very imaginative", is how Michelle's (Ursula Andress) husband describes her to the handsome but stupid jewel thief.  Mentally challenged would also be an applicable descriptor.  1973's Stateline Motel is another Ursula Andress (Loaded Guns, The 10th Victim) classic.  This movie could not fail (at least on this blog).  Car chases. murder, a jewel heist, Andress and Barbara Bach, betrayal, bad dubbing, and infidelity all add to great B movie drama. 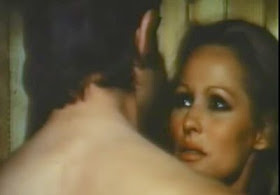 The plot:  Eli Wallach and Fabio Testi (a name that oozes potency) pull off a jewelry store robbery in Montreal. Joe (Wallach) shoots a customer in the back during the robbery (the poor sap deserved it as he tried to escape, leaving his girl friend in the store).  Floyd's (Testi) masterful driving eludes the police and the two ditch the getaway car.  They agree to separate (don't ask why) and meet in Vermont the next day.  Floyd then heads to the border but gets sidetracked by the song playing on the car radio and runs into a snow bank (idiot).  He finds refuge at a nearby hotel run by Michelle's husband.  Next door to the hotel is the incompetent mechanic, and part time demolition expert, who suspects Floyd of the robbery and is tasked with fixing Floyd's car. 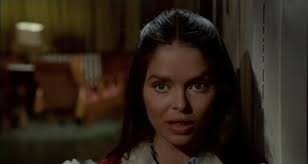 Floyd instantly falls in love with Michelle, though he probably should have held out for Barbara Bach.  Bach plays a hotel employee who figures out everything that is going on and is dating a local cop.  How does Michelle instantly capture Floyd's affection?  Parading around in lingerie?  No.  Speaking softly in Italian to him?  No.  She sits dumbfounded in front of the TV captivated by cartoons wearing a Mickey Mouse shirt, and playing with a Raggedy Ann.  He even believes her line about being an exiled European princess. 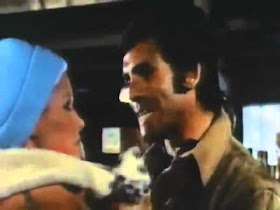 The plot thickens:  When Floyd is not able to make it to Vermont to meet Joe, Joe believes Floyd is absconding with the jewels.  Joe then heads to the Stateline Motel.  At Michelle's urging, Floyd eventually chooses this path, as Michelle begs him to take her with him.  Then, the biggest plot twist, someone steals the jewels from Floyd's hotel room (the dolt hid them under the mattress). All the while, Barbara Bach is in the background, looking really sweet, and smarter than Floyd and Michelle times ten. 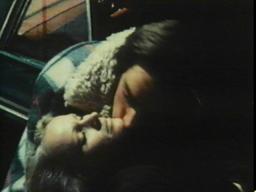 With Joe and the cops closing in, Michelle and Floyd need to getaway fast.  Will they, or are they two doomed lovers?  See this movie!  Andress and Bach play to the camera very well.  Bad dubbing aside, this is a B movie classic.  Ursula Andress' Michelle blows away  Jessica Lange's character in the remake of "The Postman Always Rings Twice." 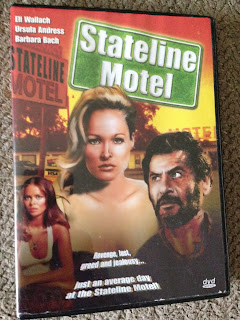