Today's B movie heroine, if armed with a gun, has a special place reserved in our hearts.  Empowering, sexy, independent, strong, and determined are traits that are indeed noble.  Unlike the whiny idiot which Meryl Streep portrayed in Silkwood, the B movie heroine is someone we actually want to see in the movies we watch.  In the 1800s, guns did not so much embody these traits, rather the ability to perform complicated brain transplants and demonstrate sexual independence at the same time set apart our female heroines.  Hence, 1971's Lady Frankenstein, in which Sara Bay (aka Rosalba Neri) is the Baroness, delivers a portrayal that will have all men drooling. 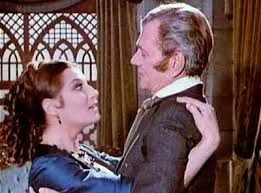 The plot:  Baron Frankenstein, played by Joseph Cotten (Baron Blood, Citizen Kane), is in the midst of creating life.  His beautiful daughter chooses this time to visit.  The Baron deeply wants to keep his daughter away from his experiments, but what young lady can stay away from playing God?  She sneaks into his lab and reads his notes thus angering her dad.  The Baron and his assistant, Dr. Marshall, manage to complete the experiment while she is sleeping.  The good news is that the Baron created life out of dead body parts.  The bad news is that his creation squeezes him to death, escapes from the lab and kills a bunch of naked Italians and other beautiful women.  Small sacrifice, perhaps, but the village authorities see it differently and attempt to track down this fiend. 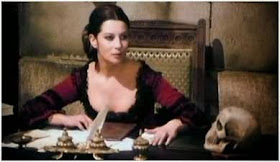 No time for mourning!  The Baroness realizes that she can pursue two interests at once.  Creating a better monster, by using the brain of Dr. Marshall (who is aging too fast for the Baroness' liking) and the body of a retarded servant who she enjoys carnal relations with.  It is unclear if this servant also enjoys these relations.  The Baroness wants her cake and wants to eat it too.  Seducing the retarded, however rewarding that may be to her, certainly pales in comparison to seducing the retarded when equipped with the brain of a doctor.
As the village authorities close in on her castle, she completes the experiment.  Unfortunately for her, the original creation is also closing in on her, and he is not happy.  Will the two creations now meet?  Will this spell peril for the Baroness? Yes.  Finally, the most powerful and extraordinary endings you will ever see.  I won't give it away, however you will see the Baroness' brilliance and nymphomania meet in a fiery conclusion. 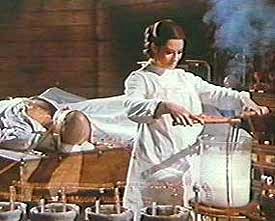 Lady Frankenstein is an Italian horror film equipped with great sets including the village, the castle, and the obligatory graveyard.  It has the feel of a Hammer film, and the beautiful Sara Bay is captivating in the title role.  The acting is appropriately over the top, and perfect for this story.  When the credits role, you will tell yourself  "I don't bleeping believe what I just saw."